I mentioned below that I have been listening to Barbara Kingsolver's Animal, Vegetable, Miracle. I am just about finished, and glad that I am. It is not that I don't share her concern and even beliefs about the folly both personally and nationally of having the food we consume travel an average of 1500 miles before it hits our plates. I do. Besides the destruction of the small family farm, the subsidies provided to big business which deceives us into believing we are buying cheap food, etc., etc., - small farm animals and vegetable do taste better.

So what's my beef? I don't worship food-but I am beginning to suspect that the author of Animal, Vegetable, Miracle does.

Sure, I think our way of life on the homestead leads to a great quality of life-working together and eating fabulous meals together. But it is the together and together with God that is the emphasis. The food just helps the celebration-it isn't the celebration itself.

So, I guess I am glad I have listened to the book. I did learn a few things about asparagus, for instance. But I am glad it will be over by the time I get back to the homestead today.

Oremus pro invicem!
Posted by Jim Curley at 11:42 AM No comments:

This is from a letter I received today:

You all remain in my prayers always. I like to think that every time we receive the Eucharist, there is something like a lifeline connecting all Catholics together; almost like looking at the same stars at night. You are far away from each other, but somehow by such a seemingly simple act, you suddenly traverse distance. It actually goes deeper than that, though. Just as the stars we see are the same as the ones gazed upon by the pagan Romans, the Eucharist is the same has been received by Christians for over 2000 years. Thus we mystically traverse both distance AND time, the two barriers to fallen man.

I was waiting for an overdue paycheck in the mail-but received this treasure instead.
Oremus pro invicem!
Posted by Jim Curley at 9:49 AM 1 comment:

So what do you think this is? 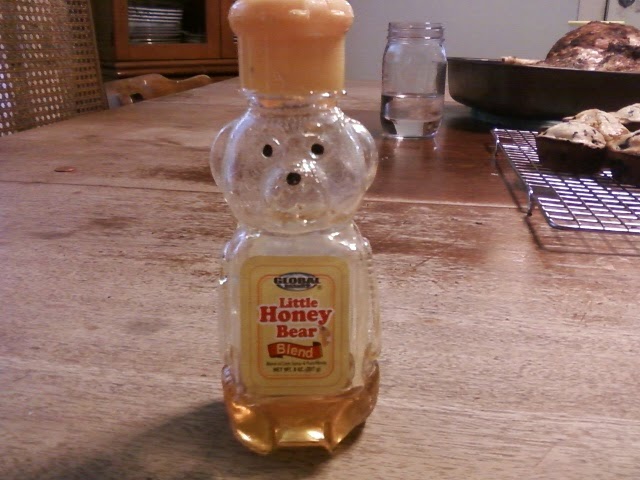 If you said honey, you'd barely be right and mostly wrong. If you read the fine print, this product is 90% corn syrup blended with honey for flavor. (I am surprised there is any honey!)
The honey bear package with the prominent HONEY in red should constitute deceptive packaging and advertising. But big business and big Ag must have its way. Regulate the little guy out of business and then deceive the public into thinking they are buying healthy products.

Now who does the government serve? Big business!

A comment in the post below reminded me of the following piece which was published on www.catholiclane.com a few years ago. Being lazy, I repost it instead of writing something original.

The text is below with the original link being: Original Article .

Randians Left and Right are Wrong by Jim Curley

There was a piece on National Public Radio (NPR) a week or so ago charting the influence of novelist/philosopher Ayn Rand in today’s politics, specifically in economic policy touted by certain Republicans in Congress.  Ayn Rand was a proponent of “objectivism,” that is quoting from the NPR piece:
It is, she says, a system of morality “not based on faith” or emotion, “but on reason.”
Rand wholly rejected religion. She called it a weakness, even a parasite — one that convinces people their purpose is to work for the betterment of others. In fact, she says, for man, the truth is just the opposite.
“His highest moral purpose is the achievement of his own happiness,” she says.
“One of the principal achievements of this country in the past 20 years, particularly — I think most people agree — is the gradual growth of social, protective legislation, based on the principle that we are our brothers’ keepers.”
“I feel that it is terrible that you see destruction all around you, and that you are moving toward disaster until and unless all those welfare state conceptions have been reversed and rejected,” Rand answers.
“I am opposed to all forms of control. I am for an absolute, laissez-faire, free, unregulated economy.”
NPR proposes that Ayn Rand’s influence is strong on Capital Hill today among Republicans.  NPR quotes Rep. Mick Mulvaney (R-SC) (my Rep) who has read her books “6 or 8 times,” Allen West (R-FL), Speaker John Boehner, Paul Ryan (R-WI), and Steve King (R-IA) who either give favorable reviews of A. Rand or who seem to speak her message.
There is no doubt that Republicans often decry the Welfare State and numerous regulations.  And true, some Republican Congressmen have been enthusiastic about Ayn Rand’s philosophy.  This is troubling, especially when practicing Catholics show their enthusiasm without some caveat on her general philosophy.
I would also venture that while in general conservatives do decry entitlement programs and the “regulation state”, that doesn’t necessarily mean they are all Ayn Rand enthusiasts.  One can certainly stand for smaller government and subsidiarity principles without agreeing that man’s highest moral purpose is achieving his own happiness.  Further, I would argue that most Republicans only differ in their preference in size of government and regulation by a matter of degree from Democrats.  We don’t see many radical proposals on the size of government and regulations gaining traction even when Republicans hold the majority; mostly we see skirmishes on the edges.
But this isn’t by far the whole story.  There seems to be many on the Left in Congress who subscribe to Ayn Rand’s objectivism on social issues in a much more committed way.  The push for the homosexual agenda, abortion, and contraception by the Left is based on the flawed philosophy of pleasure without responsibility, which is very close to Ayn Rand’s “highest moral purpose”.
It seems Ayn Rand’s objectivism has influenced both sides of the aisle in government and in the general populace, and most dangerously in the social issue sphere.  We are constantly bombarded by the message that the purpose of life is simply a hedonistic pursuit of our own happiness, and some of us have bought it.
Man’s highest purpose is to know, love, and serve God.  This is the only philosophy that will make man happy.  It is a philosophy of being our brother’s keeper in a personal way.  It is a philosophy of self-sacrifice which paradoxically makes man happy.  Only when we seek the happiness of others do we ourselves have peaceful joy.
We are our brother’s keeper.  The government’s attempt to preempt our personal role as our brother’s keeper has unfortunately been accepted by many.  When, as a society, we let the government do our charity, we rob ourselves individually and as a society of the opportunity and obligation of doing God’s work.  Peter Maurin of the Catholic Worker Movement decried this trend of letting government do our charity.  In a conversation with Stanley Vishnewsi on their first meeting, Peter Maurin said:
The purpose of the Catholic Worker is to create a society where it will, be easier for men to be good. A society where each person will consider himself to be his brother’s keeper. A society where each one will try to serve and to be the least. God wants us to be our brother’s keeper. He wants us to feed the hungry at a personal sacrifice. He wants us to clothe the naked at a personal sacrifice. He wants us to shelter the homeless. To serve man for God’s sake, that is what God wants us to do! (from Wings of the Dawn by Stanley Vishnewsi and reprinted in The Catholic Worker, May 1976-The Catholic Worker Movement website at www.catholicworker.org)
It would seem to me that Congress and the American people would do well to think about Peter Maurin’s words rather than Ayn Rand’s.

Once a week I travel to a client's facility about 70 miles away. This fall I am also teaching a course at a technical college about 60 miles away. While I am news junkie, I finally got sick of it and started getting audio books from the library for my treks.

Actually, the trend started during Lent when I gave up listening to the news on the radio. During that time I listened to CD's on spiritual topics.

Then on two long car trips to New Hampshire and Virginia this spring, I got audio books (one with my son-so we listened to one of my all-time favorites: Treasure Island. It was good to 'read' it again after some many decades.)

More recently I have listened to 2 Louis L'Amour novels about Barnabas Sacket, the patriarch of his Sacket novels.

I wish I could find Allen Eckert books (The Frontiersmen and Court-martial of Daniel Boone) audio, but am settling for actually reading them.

Just now I am listening to Animal, Vegetable, Miracle by Barbara Kingsolver. Some good information so far, but she is a bit preachy and probably not a great choice for younger ears as she seems to linger on comparisons between human and plant reproduction quite a bit, I think for humor value-they are only functionally related.

I really need to add in some good spiritual audio here. I listened to Chesterton's Everlasting Man on tape on a long trip many years ago.

What I have found is that when listening to the news, my mind wanders and I sometimes ponder many things. When listening to a book, I tend to stay focussed on the book. My imagination is more static. Sometimes that is good, sometimes bad. 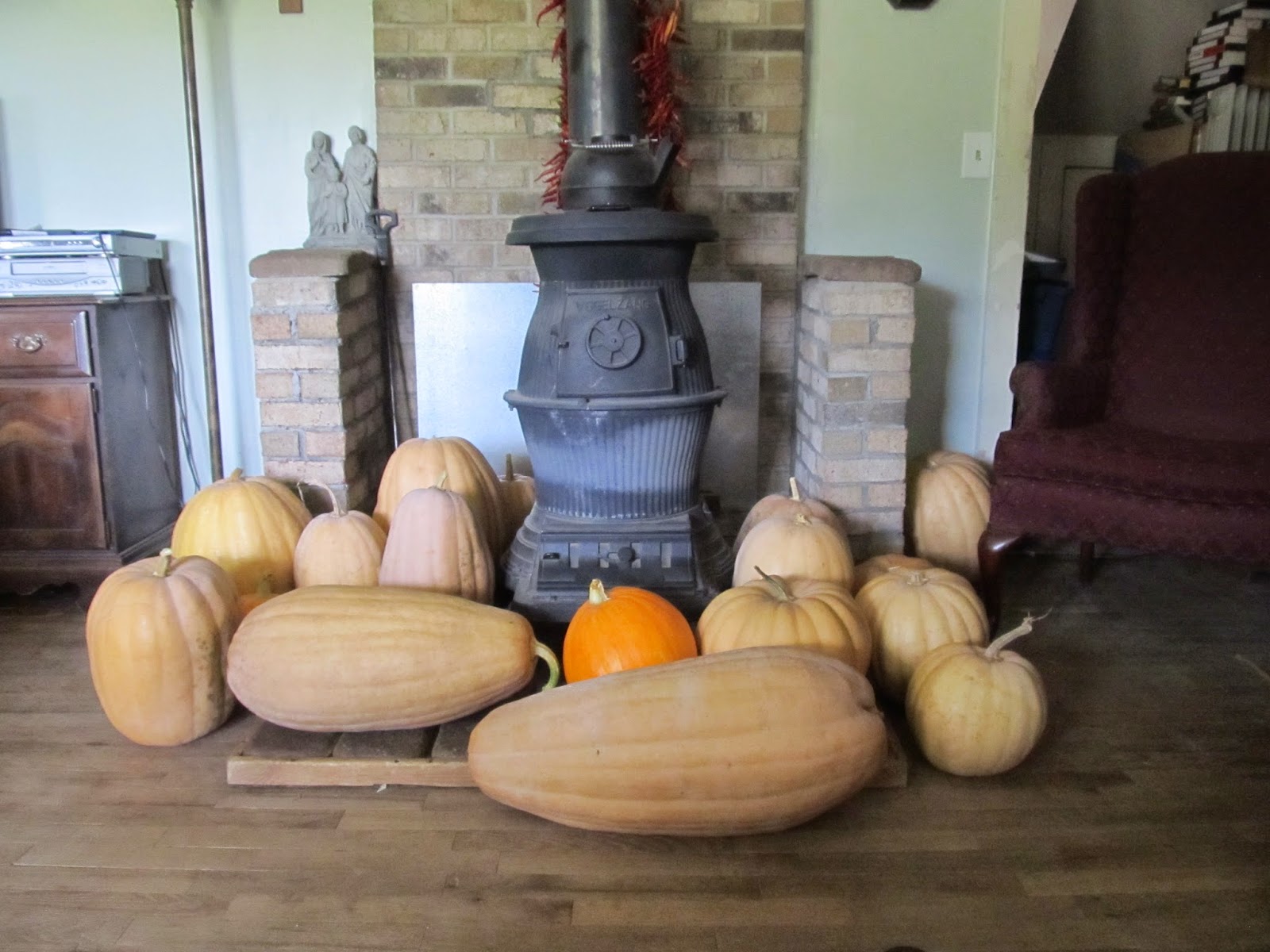 On this feast of the Holy Name of Mary - Oremus pro invicem!
Posted by Jim Curley at 7:30 AM No comments:

This Sunday's homily was one which should have been heard by some of our bishops!  I know they heard the Gospel on the duty for fraternal correction, but I do hope they put it into practice more than they have.
Of course, this is always the temptation-to hear the Gospel (and homily) and apply it to someone else instead of yourself!
The two previous Sundays (at 2 different parishes) I heard in both homilies a variation "Pray for what God wants to give you, instead of what you think you need." This is something I need to hear almost every day!


**********************************
If I were to take the picture of the pumpkins around the woodstove which appears below, today, it would show 9 pumpkins. There are plenty more to pick in the coming days, but not as many as I hoped for.
Summer garden is about done except for the okra, a few eggplants, and a Jalapeno pepper plant. Am trying to get the fall garden in.
It looks like the peanuts will ready sooner than expected. I pulled a few plants over the weekend and they look pretty ready. We have about an acre of peanuts. With the downpour of rain yesterday and today, I probably need to get the peanuts out of the ground sooner rather than later so that I don't have them rotting in the ground.
Finally, for a while I thought we wouldn't get any syrup from our small sorghum crop. The weather has been spotty with drought conditions for a few weeks followed by deluge, then drought again. But it looks like the sorghum will produce something. I should have a few weeks before harvest.
*************************************
Now really finally, I have a couple new links on the sidebar. Good friend has moved to Chile and reports his adventures (Our Chilean Adventure). Also, Those Catholic Men is a new site (disclaimer, sometimes they carry my writing) with some good articles for men.
Oremus pro invicem!﻿
Posted by Jim Curley at 9:17 AM 2 comments: