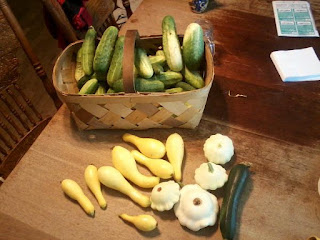 Am on summer break from technical college next week so may be I will have time to say some things then.

So here it is. She looked ready to farrow for about a week now. Becky had 11 live births. Of course thy all look like their sire, Thor.

Put up more corn over the weekend. Sorghum is up strong. We've been blessed with enough rain. This is the first summer I can remember it raining so late in many years. Thank God. 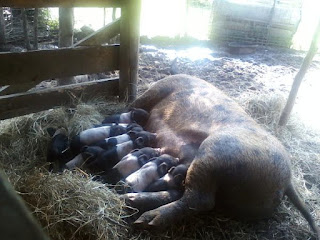 Oremus pro invicem!
Posted by Jim Curley at 6:30 AM No comments:

The Three Greates Cinematic Love Stories (of those I have seen)

Many people would consider a great love story one where a couple falls in love, undergoes misunderstandings, tragedy, and/or hardships, (possibly being separated) and then come together and get married: TheEend. (Alternately, i.e. Romeo and Juliet, death separates the lovers.)
But “the end” is the beginning of the love story. That is why I believe the greatest love stories involve couples who are already married.
My three picks: The Scarlett Pimpernel (1934 Leslie Howard, Merle Oberon); Random Harvest (1942 Ronald Coleman, Greer Garson); and Make Way for Tomorrow (1937 Victor Moore, Beulah Bondi).
The first two I wrote about in this very context 11 years ago in this space: http://bethunecatholic.blogspot.com/2005/01/love-stories.html
The last I mentioned briefly about just a year ago.
We watched Make Way for Tomorrow again last night. Orson Welles said about it: “Oh my God, that’s the saddest movie ever made! It would make a stone cry!”
It is the story of a couple married for 50 years who have fallen on hard times and have to go live “temporarily”, but separately 300 miles apart, with two of their children. Of course all things temporary become permanent if there is no plan.
Near the end, they reunite for a few hours and go on a date-reliving the happiness and failures of their 50 years of marriage. The “date” is captivating. 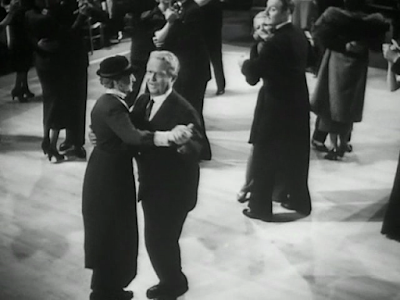 One particularly memorial reminisce is when Bark (the husband) recalls that Lucy (his wife) chose him over another she had been dating. The other became a banker and had foreclosed on their house at the beginning of the movie. Bark says, “He got my house, but I got his girl.”
One of the best scenes of acting I have ever watched without dialog occurs at the end, performed by Beulah Bondi – who was in her 40’s at the time playing a 70 year-old woman.
It was reissued on DVD a few years ago. We borrowed it from the library. Roger Ebert gives it a 4/4. The Criterion Collection calls it: "one of the great unsung Hollywood masterpieces". The director of MWfT,  Leo McCarey, won his first Oscar that same year for The Awful Truth (Cary Grant, Irene Dunne). However, he commented that he got the Oscar for the wrong movie. I agree.
Do see it.


Oremus pro invicem!
Posted by Jim Curley at 6:00 AM 2 comments:

Couldn't say it better myself

This voting guide is an invaluable source of reasoning and mirrors my thoughts exactly.


Here are a couple of the gems included:

When people use variants of the “lesser of two evils” argument, keep in mind that this is only a partial statement of the actual principle of reason. The actual principle is, “If one cannot avoid doing one of two acts, from both of which will follow an evil effect, one is obligated to choose the lesser of the two evils.”  Note that the premise here, which is fundamental to the entire principle, is that you cannot avoid doing one of the two acts. For this to apply in the context of an election, you would have to be constrained to only choose one of two candidates and have no other option – you must vote and you must vote for one of the only two candidates presented to you. Is this the actual case in our elections?

Your actual responsibility in an election is to vote for the candidate or position you think should win. What you vote for represents what you choose regardless of the outcome. You are not to blame for the votes of others.

I urge you to read the whole thing.

Oremus pro invicem!
Posted by Jim Curley at 8:04 AM 6 comments:

Mrs. Curley asked me to buy some Bennings Green Tint squash seeds-not knowing what it was. So when I started picking them, no one knew what they were (I don't label my rows). We had to google it. 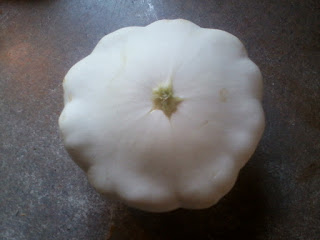 Here are the funny guys. Raw, they taste great! We'll see in an hour or so how they tasted cooked.

We have been eating sweet corn with supper for a few days now. Today we picked all that was ready and put up 8+ quarts of blanched corn. There is nothing like eating sweet corn on the day it was picked. I could never get tired of it.
Here is Connor today, taking delight in what he sees as he husks the first ear. 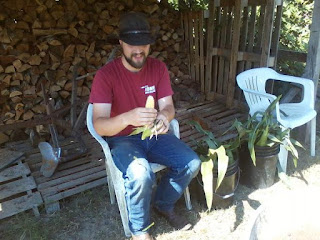 It seems quite unpenitential that we are having more tonight with tuna/egg salad.
If the rain keeps coming, sweet corn should remain on the menu most of the summer as I staggered my plantings. I even have a small batch that could theoretically be harvested in September. But all this is being overly optimistic.

Updated: The nature of male and female

Update: I have written to both of my US Senators (Graham and Scott) regarding the FY17 NDAA (National Defense Authorization Act), which I believe is up for a vote in the Senate later this week. It contains a provision requiring our daughters to register for selective service. I have urged them to reject any amendment to this effect and/or the entire bill if it contains this provision.

As with the authors of this piece at Crisis Magazine I haven't read much, if anything, about this in the Catholic press (however, maybe I am reading in the wrong places?).
Some time ago, (I can't find it) I wrote in this space about my responsibility to my daughters if they were a) required to register for the draft, and b) if the draft was actually instituted. What if (a) happens - which appears likely, but (b) never happens? What then?
I think (b) is not going to happen unless we are attacked. The American people are okay with foreign military adventures of dubious merit when we are using an all-volunteer armed service. However, if their sons (and daughters) are being drafted for these ventures, I think many in congress will be running scared.
However, I am finding my predictions are more wrong than right in recent years (That could never happen! yet it does with alarming regularity.) So maybe I am all wet.
The last few years have done nothing if not demonstrate how confused man is about the nature of male and female. Things that seem (are) so obvious from observation, science, and personal experience are the subject to mass confusion.  The Emperor's new clothes?
Oremus pro invicem!
Posted by Jim Curley at 5:20 AM 1 comment:

In and Up; Here and Gone (Updated)

Update: Regarding my final comment below about the presidential election, I feel the way this guy thinks , excepting the last two paragraphs. (And by the way, we are eating our sweet corn!)

So we finally planted the sweet sorghum this morning. The peanuts are in and up. The pumpkins are in and up. We will be picking at least a dozen ears of sweet corn for supper on Saturday. Still picking peas, broccoli and spinach, although these three are petering out fast.
God is good to us. We've had plenty of rain and just enough sun to plow and plant.
It just turned to hotter this week. While we've had a few 90 degree days, it was still getting cool at night. But with this week, the coolness has ended. Too bad. I have 2-3 hogs to put down and would rather have done it before this turn of weather. Oh well, we will still get it down.
Matthew, the seminarian, was here for a week before going back to Texas to work at a Catholic summer camp.
Connor (NE Catholic) has been here for 2 weeks. He's been working hard helping me get this place in shape for the summer and next fall. He will be heading back North for work at the college for the summer in a couple weeks. He is a counselor at the high school summer program at NCC.
Nicholas (Wyoming) came home last weekend after a 10-day mission trip in Nicaragua. He will be here for almost 2 months before heading back to Wyoming to work for the summer. Nick helps lead the freshman outdoor trips at WCC.
So we are enjoying having, playing and working with the boys while they are home.
We are fostering a young boy this summer, so it really is a full house once again - for a while.
I meant to link to this several weeks ago, because it is so telling and true. I don't need to comment; it speaks for itself.
Finally-what about this election coming up? Maybe The Constitution Party? Of course I still have some bumper stickers left from the '012 campaign:).