One Day in the Life of Ivan Denisovich - by Aleksandr Solzhenitsyn.


About a third of the way through, I think the entire Gulag Volume III is being illustrated up in this 150 pages quite effectively.
Last day in November - remember to pray for the Holy Souls in Purgatory all year round!


Oremus pro invicem!
Posted by Jim Curley at 11:17 AM No comments:

I was trying to remember if I liked The Power and the Glory by Graham Greene. Apparently, I did.


Am just finishing a collection of short stories by the same author - not too much of a fan of these. I am finishing it, but I haven't found anything too worthwhile.

Been listening to audio cds (downloaded from www.librivox.org ) of E. Phillips Oppenheim's The Great Impersonation and now The Double Traitor. It seems most of his books are warnings to England about Germany's war plans before WWI - enjoyable, but not overwhelmingly so.

Son Matthew is coming home from the seminary tonight. While we will miss those absent, this again should be a joyful Thanksgiving.

Think that blog post title will attract some reading?

Last night I went to an Evening of Recollection (Opus Dei style) at Prince of Peace in Taylors, SC.


I love the meditations, the prayer time, and the opportunity for confession - that's the sinning part, or actually the redemption part. In my confession, Fr. Smith talked about the leper who called out to Jesus, "Lord you can make me clean if it is your will."  While I am not skeptical of the power of Jesus, I have made that call (probably with a lot less faith), and still need constant cleansing.


This morning Thomas and I put down a hog. We didn't have any help. I figured it to be about 200-220 pounds .... After putting it down, Thomas and I couldn't lift it! I am no Captain American, but I am also no pre-1941 Steve Rogers either. (This was the miscalculation.) I think the hog was over 300 pounds. We ended up using brains rather than brawn.
We still we ready to put it on ice in under 2 hours. (Not cold enough to just hang in the shed.) Not bad for the home team.
Oremus pro invicem!
Posted by Jim Curley at 1:24 PM 1 comment:

Stealing this from TS -who got it from First Things. I wish I would have considered the last paragraph in the weeks leading up to the election. While I may seem at times to claim humility, I really had it in for those who didn't agree with me on how to vote - and sometimes I let them know it. Mea culpa! 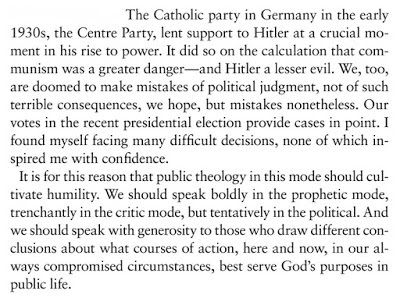 ********************
Harvested peanuts this weekend. Pretty small crop. Probably the smallest we've ever had. I can't really put my finger on the cause. We had rain, but it was sporadic. We used gypsum when they were flowering. We may not have kept up with the weeds at the end, but it has never effected us so much in the past.

Will be harvesting our small sorghum crop this week.

Then, back to clearing trees downed (in neighbor's yards) by Hurricane Matthew.

Posted by Jim Curley at 8:38 AM No comments:

In and out of the wilds 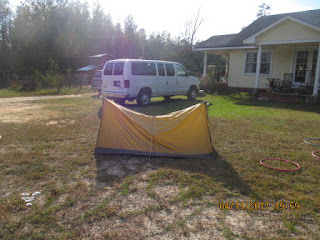 Thomas and I returned to Jones Gap last week. He resurrected my pup tent which I think I purchased in 1988 or 1989. I haven't used it in at least 17 or 18 years. It was missing a post, but Thomas figured something out for me, as you can see.
I think he just didn't want me squeezing into his one-man tent with him this time around.
We lit into the woods at Jones Gap around 2:25 PM on Monday. We arrived at the campsite (3.5 miles in) around 2 hours later. We did take a wrong turn (No Daniel Boone, I) and had some equipment problems.
Coupled with the fact I haven't really walked since our last endeavor into the wilderness in March, it was a bit slow going. We were heavily loaded for 2 nights in the wilderness.
At 4:30 it was already getting dark in the woods. We barely had time to find a good tree to hang food from, find firewood, set up tents, and start supper. 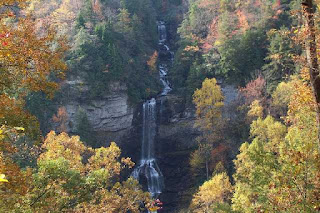 Our ultimate goal was to see Raven Cliff Falls. But through a series of mishaps and miscalculations, we walked 12 miles, but never got there. It just means we have to go back again.
We did go up to Caesar's Head. It used to be that you could go down into the formation, but apparently someone fell off the cliff a few years ago, so you have to view it from a distance. There is a great overlook with Tablerock in the distance.
We hiked up and down Tom Miller trail, which almost beat my behind. At the foot of the Tom Miller trail is a closed campsite by the Middle Saluda River where I camped with the boys back in 2002. It is a great site, but apparently all the dead Hemlocks drop branches on the site, and it is "dangerous".
No pictures this time because somehow my phone got turned on during the initial trek and it lost all charge searching for signal.
We came out of the woods Wednesday morning around 9:15 AM.
It was a great trip. Son Thomas is a great camping companion and pulls more than his share of the work.
Oremus pro invicem!

Posted by Jim Curley at 4:37 PM No comments:

Just earlier today I was telling Mrs. Curley that the Republicans won't have the guts to repeal Obamacare. (After all, Obamacare is essentially the Republican response to the old Clinton universal plan from the 90's). And Trump's promise was that he had something "wonderful" to replace it.
So what is so wonderful. Well WSJ is reporting this afternoon that Trump says he plans to keep at least part of Obamacare.

For the first time since college, I did not watch election results. I was in the mountains backpacking with Thomas for 2.5  days. (Backpack log to follow.) I didn't learn of the results til just outside a Waffle House outside of Greenville at 10:00AM Wednesday morning.

While I was thrilled that Hilary Clinton had lost, I was disappointed that Donald Trump won.

My daughter came back from the SAT's on Saturday with a quote from Thoreau (a passage on the SAT) which essentially said :

In other words, (my interpretation), if we as a people live our lives correctly, the country will be taken care of, including having good choices at the ballot box.

What we had this year is the two major candidates who reflect who we are and how we live as a people. Think on that for a bit. Angry, immoral (or amoral), bigoted, sexually immature, animalistic, liars, and cheaters.

We need to pray that the president-elect gains some humility and will seek advice. As yet he hasn't demonstrated that he will.

But we will go a long way for the future of the country if we as citizens reform our own lives.

One other (final) point. I have gotten many emails throughout the election season saying I need to vote for Trump because this priest or that priest gave a homily or talk saying so. ("Hilary is evil, Trump is just bad"). The problem is that politics is mostly in the realm of the laity. We should follow guidelines on voting from the Church, but how to play the political game is the laity's. So many people hid behind the cassocks of clergy to justify a vote for Trump. I still don't believe there was any justification. I hope I am wrong.

For some reason, I thought I was teaching classes all day on November 8th and therefore cast an absentee ballot. I realized yesterday that the college was closed for Election Day. What an embarrassment!
However, now I don't have wait in the long lines at the Bethune polling place. (The "long" being very sarcastic). I have waited to vote for more than 5-10 minutes only once since coming to Bethune. In 2008, I arrived at the polls before they opened and there was a line of at least 30-50 people. We only have 2 or 3 voting booths. But that wait was nothing like the lines I waited in when we lived in Columbia.
Really small town living (population 250) has distinct advantages. For example I have never been more than the second person in line at the post office - even on the busiest mailing day of the year.
I am tired of the election. I am tired of getting ready responses every time I hear or read that voting for a third party candidate is _______________ (you fill in the blank). In the past couple weeks I have restrained myself, but it has been difficult at times. I have been voting 3rd party since 1992 in the National presidential elections.
I have friends in SC who are appalled I would do this. But let's be real, if the Republican nominee (pick your year) can't win SC without my vote, then he is going to get hammered nationwide. This isn't why I vote the way I do, but it is reality.
Oremus pro invicem!
Posted by Jim Curley at 9:33 AM No comments: