What is old is new again

I didn't think I would see one of these in our driveway again (with us as the drivers), but with a few more people staying with us, the minivan-pickup combo just wasn't doing the job. 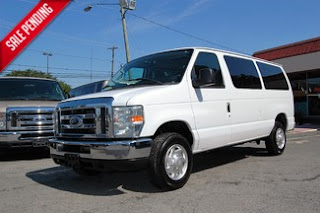 I pick it up tomorrow - the return of the 'big van'.
Mrs. Curley didn't want white, but it was the better deal for us than the tannish one.
Last year we spent our wedding anniversary moving pigs and I injured my wife by tossing a pallet her way. The year before we slaughtered a hog. I guess shopping for a 12-passenger van on our anniversary may be considered an improvement, but for who?

We saw this fellow yesterday. He is in the overflow pipe of our kitchen drain. How he got there I don't know. 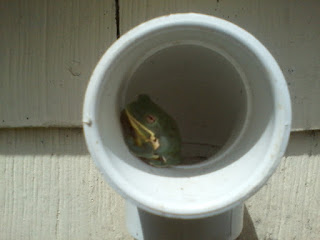 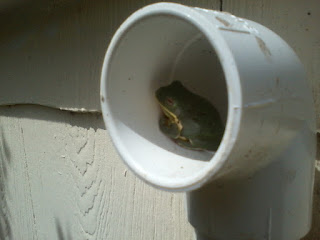 I am not sure the picture captures his "green-ness".


Oremus pro invicem!
Posted by Jim Curley at 6:33 AM No comments:

These comments are a long time coming. I haven't had much time for thoughtful posts of late. But I am on a 2-week vacation from my Adjunct teaching (really not that much time, as I have to spend a bunch of it getting ready for the Fall semester, and I do have other work), but I have a little.


The articles I am commenting on come from a mainstream, widely circulated, professional engineering magazine - not some sci-fi rag.
First: Apparently there was an article (I didn't read the article itself) in the online edition of the magazine pertaining to humans forming romantic relationships with robots. Okay, I think there have been sci-fi movies over the years exploring this, but in IEEE Spectrum? Here are some excerpts from comments on the article:

Exhibit A: One thing is sure: A company that sells good-looking "male" and "female" robots complete with humanlike anatomy will make more money than Apple, Google, and Microsoft combined. ... future people will see it as normal, just as normal as smartphones are now.


Exhibit B: Another problem is that people might become so enamored with their robot mates that they abandon human relationships. (just like they do with smartphones now? - JC)


Exhibit C: Since we don't know how human consciousness really works, we can't comment on whether consciousness could be simulated acceptably (in robots). If we believe that when humans fall in love, the brain is just implementing some algorithm, why shouldn't a machine be able to implement it too?

So, there you have it: everything comes down to utility, money, and sex. What was stunningly absent was any concern about morality. There could have been, of course- more comments online. However, the magazine only printed ones with the tone of the Exhibits above. This is the world we live in.

The same magazine had a cover article in the June issue about the role of robots in the future, i.e. can we trust them in the operating room, on the road, and on the battlefield.


The section on autonomous weapons was particularly interesting. All those quoted assured us that a human would have a final say on targeting. I have several concerns-even if this is the case.
First, we shouldn't want to make war easier to conduct. Along these same lines, will the technology populations care so much about what foreign adventures conduct if all the killing (on our side) is done by remote control?
Second, the interviewees claim we would be saving lives-but whose? Our soldiers, sure, but innocent civilians? Does the warfare today with all our targeting technology really protect civilian?
Thirdly, who will get their hands on these remote control destructors? The Cold War and its aftermath have armed every population and tens of thousands of terrorists around the world. Do we really think the arms trade will stop here?
Once again, get out your rosaries!
Oremus pro invicem!
Posted by Jim Curley at 5:30 AM 2 comments:

I have been slogging through The Brothers Karamazov since early May. The back cover claims three of its chapters "rank among the greatest pages of Western literature."
Who am I to dispute that? I would agree that "The Grand Inquisitor" was immensely thought provoking.
I did enjoy it, but wanted it to end after a while. And certainly the claim that Dostoevsky planned a trilogy is borne out by the ending (and by a stray sentence on the first page) which leaves a few major plot lines in the air.
I broke with The Gulag ... to read The Brothers. So I stay in Russia. UPDATE: Just noticed that I first ordered The Gulag interlibrary loan in 2008. Now I have my own copies-but talk about taking a long time to finish a book!
I do have one question to research. Several times in the book, the Orthodox worship was referred to as: "the Mass." I thought the Orthodox referred to "The Divine Liturgy" as opposed to "the Mass", which is, to my understanding a Anglo-version of the Latin dismissal-thus doesn't make sense for an Orthodox liturgy. Maybe it was a Roman translator?
Ah, these loose ends.
Oremus pro invicem!
Posted by Jim Curley at 5:00 AM 1 comment:

Update: I suddenly realized that I posted this video a couple years ago. Not that I tire of it, but instead I will post a different video below of Nick, Matt, and Connor doing one of Nick's songs.  Again .... enjoy.

I hope I am allowed a little latitude as a father proud of his children. Someone was watching my son Matthew's YouTube channel today, and I just can't help posting this video of a song he wrote for and performed at my 50th birthday party a couple years ago.

It makes me cry-especially because I wish the words of the song really reflected my fatherhood.


Oremus pro invicem!
Posted by Jim Curley at 11:17 AM No comments: