Mrs. Curley and I have been talking about Christmas this year. There was a year in the tight Requiem Press days where we made all (or just about all) our Christmas presents for the children. The shop and sewing room were very busy that year. As I recall there is a Little House on the Prairie episode which inspires this kind of Christmas gift giving.

We have been talking about the supply chain and lamenting out personal dependence on it and China. But I read this at Front Porch Republic this morning. Here is the "money quote", although you read the whole thing.

With the supply chain tangled, we have what may be a brief moment to consider its flaws without being blinded by the glare of its surface efficiencies. Perhaps, we can craft a Christmas experience not dependent on plastic molded an ocean away. As David Cayley, author of a fine introduction to the work of renegade priest Ivan Illich, noted on a recent B.S. podcast, we should beware of an institutionalized Incarnation. The more we farm out our expressions of affection to things and entities designed to do the work for us, the more we miss the point. More gifts rooted in real engagement and fewer dependent upon shipping containers could be one of the benefits the broken supply chain delivers.

Mrs. Curley and I had already discussed moving back towards opening the workshops for this Christmas. (I hope this doesn't set out panic in my children - if any of them even bother to read my blog anymore.)

Posted by Jim Curley at 8:34 AM No comments:

Now when I buy bull calves, I always ask whether they got colostrum from their mother. People do lie about this, but there is no reason to deny the calf the colostrum. You can't use the first day or more of the milk from the mother because it is all or mostly colostrum. 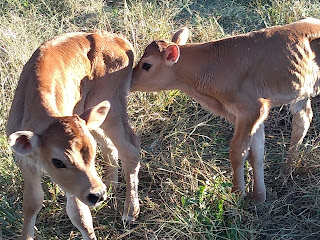 Well, we have raised a bunch of calves here in the past. I am pretty sure these two did not get colostrum. We have been fighting the good fight all week to save them. Probiotics, electrolytes, Re-Sorb, using bottles and fluid feeders. It looks like we are winning. At least one calf seems to be back to normal. The other is improving every hour.

We are still cutting wood, but now are burning it occasionally too. Two mornings we have taken the chill off with a small fire in the wood stove. More to come....

Weaned another litter of pigs this week. What an adventure! The sow kept breaking away from the breeding pen to get back near her pigs. This from a sow who was digging holes under the fence daily to let the pigs out! Now pigs (rather hogs) from her first litter (now 160 pounds) are trying to suckle off her - and she is letting them. I have never the seen the like. Wish I had a camera with me.
Oremus pro invicem!

Posted by Jim Curley at 2:21 PM No comments:

Sometimes unrelated articles converge to an idea or conclusion. So this past week I read Phil Lawler's piece on the state of the public schools and his advice:

Educate your children at home, if you cannot find another school. Find other parents who share your concerns and will match your commitment, and start your own school. Scrimp and save and do your best; it will not be perfect, but it will be better for your children than the indoctrination program that now confronts them.

Don’t wait for the next outrage. Don’t wait until your children are seriously hurt. Get them out of the public schools. Now.

And then I read the seemingly unrelated piece by David Cooney explaining why the unlikelihood of capitalists being woke is really not so surprising:

Conservatives will claim that it is because the news, education and entertainment industries have been “taken over” by liberals or leftists, including many socialists, who indoctrinate our children in school and the public in general through education, biased news reporting and the underlying message of our entertainment industries. There is an element of truth to this observation, but it doesn’t really explain how they were able to accomplish all of this.

In my view, the blame for that is mainly the conservatives themselves. It was the conservatives who failed to learn the lessons of recent history. Every socialist regime that has arisen in the last century has employed the same tactics of taking over education, news and entertainment and ensuring that only one point of view could be presented. Taking control of educational institutions was always a high priority because the socialists knew that they might not be able to change the minds of adults, but that they could use schools to indoctrinate children to believe things contrary to their parents beliefs and values. Conservative capitalists knew that liberals and socialists were “infiltrating” all of these arenas in our societies. We know they knew it because they have spent decades complaining about it. Yet, they did nothing significant to resist it.

So here is the convergence. Why and the solution, but immediate and for the future. Will anyone answer the call?

Posted by Jim Curley at 9:42 AM No comments: