Behold, the time is coming, nay, has already come, when you are to be scattered, each of you taking his own path, and to leave me alone. And yet I am not alone, because the Father is with me.  I have said this to you, so that in me you may find peace. In the world, you will only find tribulation; but take courage, I have overcome the world. John 16:32-33
Posted by Jim Curley at 9:14 PM 1 comment:

Make your children see this one ....

... and it is good to see with your spouse too.  Make Way for Tomorrow

We borrowed it from the library the other day, and (in my Dad's words) it is "a drippy movie"-that is no one will have dry eyes after this one.

The review to which I linked says of marriage:

Our lives appear to us as a story: a story that we tell ourselves about our past, act out in the present and script for ourselves into the future. To share one’s life with someone, then, is to embark on a daring creative venture in shared storytelling. To marry is to say: Let us make of our two lives one story, a story that I will tell to you and you will tell to me. Telling and retelling that story — reminiscing about shared experiences, especially the happy or funny ones — is one of the secrets of happy couples ...

Posted by Jim Curley at 5:30 AM No comments:


Oremus pro invicem!
Posted by Jim Curley at 8:15 AM 4 comments:

“At the heart of liberty is the right to define one’s own concept of existence, of meaning, of the universe, and of the mystery of human life.” Justice Anthony Kennedy (Casey decision – also quoted in Lawrence decision, and certainly alluded to in the DOMA decision)
“What is Truth?” – Pontius Pilot


The new standard of Justice Kennedy is the old standard of Pontius Pilot, who, if you recall, crucified our Lord!
This is why we are now to call men who think they are women, women? same-sex couples who think they are married, married? white people who think they are African American, black? people who can’t decide what they are, they, or zir, or hir, or non-binary or …..?
If I think I am President of the United States, do I get to be the President? (And do other people have to accept my concept of my own reality?)
If I think I am the husband of the woman down the street, do I get to be her husband? (ditto here.) Note to wife: I have no desire to be anyone’s husband but yours!
If I identify myself as a horse, does that make me a horse, and does it require others to treat me like a horse? (Do I really want to be treated like a horse?)
Where is mankind (er, humankind, er they-kind) heading? Can’t everyone see this is just so much nonsense? A child (before the re-education that is now taking place) would certainly see this as nonsense.
Wikipedia (that standard of all fact!) gives the definition of gender identity as: a person's private sense and subjective experience of their own gender. This is generally described as one's private sense of being a man or a woman, consisting primarily of the acceptance of membership into a category of people: male or female.
What????
One dictionary defines identity as: the fact of being who or what a person or thing is.
Another defines identity as: a) sameness of essential or generic character in different instances. b) sameness in all that constitutes the objective reality of a thing.
Get that: “the objective reality of a thing. – not someone’s own perspective of a thing.
Of course, standby for a change in definitions based upon the new reality of no reality.
Am I forseeing a time that the only fact or reality will be the prison cell for those who actually reject the nonsense and hold on to truth?

Every Saturday night when we do Night Prayer from the Liturgy of the Hours, we read:

Hear, O Israel! The Lord is our God, the Lord alone! Therefore, you shall love the Lord, your God, with all your heart, and with all your soul, and with all your strength. Take to heart these words which I enjoin on you today. Drill them into your children. Speak of them at home and abroad, whether you are busy or at rest. (Deuteronomy 6:4-7)


It occurred to me that this is surely a prescription for the vocation of father. First, there is the universal call to holiness: Therefore, you shall love the Lord, your God, with all your heart, and with all your soul, and with all your strength.
Then there is the call of the father on how to raise his children: Drill them into your children.
Then the father as spiritual head of the family: Speak of them at home ...
And finally, the father as the domestic church's face to the world: and abroad ...
Of course there is nothing here specific about a father's vocation as husband, but we can go to St. Paul for that ....
Oremus pro invicem!
Posted by Jim Curley at 11:22 PM No comments: 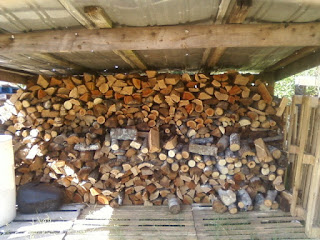 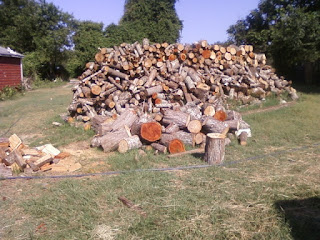 (I think my brother and family are coming at the end of this week - maybe they can help!)

We got a late start this year because of my work schedule and 4-5 weeks without a drop of rain. The chickens kept eating my corn so I found a new place to plant. But the lack of rain means we may get little if any. However, finally okra, cantaloupe, zucchini, and pumpkins are up, but way behind (except the pumpkins which are right on time.)

We are however getting green beans. 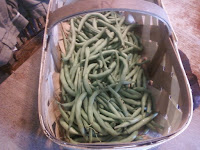 And I found the first Roma Tomatoes on our vines. 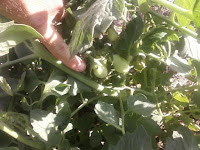 We try to do some of this in our own humble way. - Oremus pro invicem!
Posted by Jim Curley at 8:22 AM 2 comments: