Mentioned in the last post was that we had moved many of our pigs and breeding hogs to the front yard. Here is the new view from our front porch. 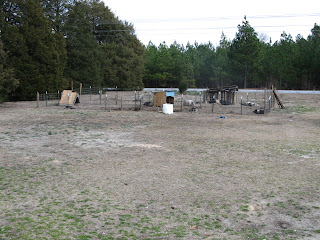 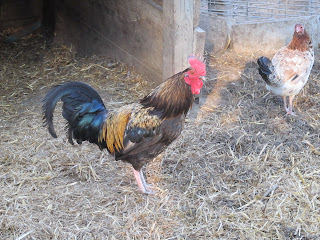 And here is one of our roaming gamecocks and game hens. The game hens lay and hatch 20-30 chicks each year without us doing a thing. They rustle their own food. We have almost 30 hens and some 8 cocks roaming around now. We need to thin them so they won't destroy our garden. With 8 hens and 2 cocks, they won't do much damage. We will sell a few and put a few more in the freezer.

Received our ashes this morning. Impressed by the homily's call to fast from entertainment and desserts so we can make more time for prayer. Here's to an initially painful but eventually uplifting Lenten season!

First, no news related to my last two posts. We thought things would be settled by now, but I guess some wheels turn slowly. That being the case, we just need to plow ahead with our spring agenda.

We rotate our hogs from pen to pen and plant in open pens as much as possible. But there are some areas which have seen only brief breaks over the years. Our garden has been primarily in our front yard with some exceptions (most notably the tremendous corn we had last year in an old hog pen). This year we are rotating things a bit more. Since we have scaled down to three sows, we have more open areas and more options. So in the past few weeks we have been moving all of our pigs and hogs onto the front lawn/former garden. There is still some gardening space, but a good third of it is now occupied by some growers and most of our breeding stock.

Moving our breeding stock on Friday turned out to be quite an adventure. Moving hogs in recent years has usually not been a big deal. We have some experience and know the best way for each sow or boar. But our youngest sow, Sal, gave us a run for our money on Friday. We had a trailer which we backed up to the pen gate. Normally a hog will follow food into the trailer. We moved our boar and then our first sow with no problem. Then came Sal. She just wouldn't cooperate. First we tried to lure her; then we tried to push her; then we tried to back her in with a bucket over her head and a rope tied to her back leg. She didn't want to have any part of it. I now recall her mother used to be the most stubborn hog to move also (although now reformed). Finally we moved Sal into the shoot area between the gate and the trailer. But instead of moving forward, she overpowered the shoot wall and escaped. Two of the boys grabbed at the still dangling rope from her hind leg and quickly wrapped it around a tree-but not without some rope burns first. Finally, we hemmed her in with some hog panels. Since, the overgrown area she had escaped to would have been difficult to manuver the trailer into with the truck, Mrs. Curley and I disengaged it and manually pushed it over rough terrain to the ad hoc holding pen. Finally, here Sal decided she had lost, and boarded the trailer.

Instead of a 15 minute job, we spent almost 3 hours just on Sal. We had planned to slaughter a hog Friday afternoon, but it was too late (and we were too spent) to continue our plans. Such is homestead life. Plans are always thwarted.

We will (if all goes according to plans - ha!) put some onions, broccoli, romaine lettuce, and peas in this week. Our collards from the fall (planted late) are now doing well and are all that is left from the fall garden. I did harvest a small batch of carrotts last week. I didn't plant near enough-I never do.

The start of Lent always (at least nearly) coincides with the start of planting. I think it seems quite appropriate in some ways. The spiritual work we do in Lent (or lack thereof) results in the harvest of Easter. Likewise, with planting.

My thanks for all the prayers. No decision yet-it'll be another week or so at least as we gather all the data.

Posted by Jim Curley at 9:11 AM No comments:

I've had a job offer which would be a full-time position. It would pay well, but would require a move and an end to all but the simplest of homesteading activities. Much to think and pray about. We haven't had "benefits" in years and certainly haven't had the kind of salary in the offing.

A friend was extolling to me all the pros of going back into industry full-time. He made many good points. He ended the sales pitch with this: "and all you'd have to give up is your freedom.", and then he chuckled.

Ah, but that last is the point. Please pray for our discernment and acceptance of God's will with joy!