I come back from NH yesterday after delivering Connor to The College of St. Mary Magdalen to many tasks. We have more wood to bring home from a neighbor, there are plumbing problems in the kitchen, the peanuts appear to be ready to harvest, as does the sorghum, and I have pigs to cut. But … as indicated below, we are back in milk!

Matthew has overseen the farm excellently while I and Thomas were gone. He has picked more pumpkins, kept the animals in good health, and been adopted by our new heifer calf. (I like the sound of that, "heifer".) She bawls everytime she sees him and runs to him. I guess I know who will be training that heifer the next few years.

Not to be outdone, Mrs. Curley and the girls have kept everything else going, including unloading a large trailer of manure which was donated to "the cause".

It is surely good to be home. 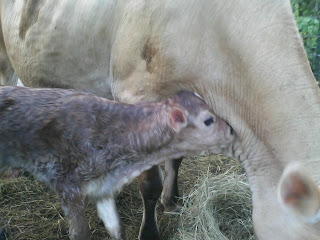 Just got back from 10 days on the road, delivering my oldest son to Wyoming Catholic College. I have never been west of the Mississippi except one business trip to San Francisco some 25 years ago. Some impressions of seeing more of this country:  You wouldn't believe the number of pro-life billboards in (most especially) Missouri. Boy they grow those rivers wide in the midwest: the Tennesse, the Ohio, the Missouri, and the Mississippi. Nebraska may look flat, but going east to west on route 80 is one long, long uphill trek. The flat land of Lander Wyoming is higher elevation than going over the Great Smokey Mountains of Tennesse. There is way too much corn being grown. Saw not a single hog in the "hog states" of Iowa, Southern Illinois, Missouri, and Nebraska. 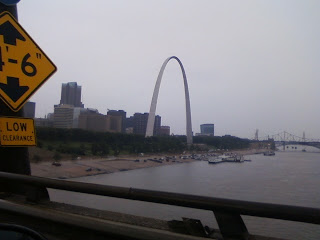 Between Laramie, WY/Rawlins, WY and Lander, WY is truly the badlands-sagebrush and desert. While there are three towns listed on the map (Muddy Gap, Jeffrey City, and Sweetwater) they don't appear in person. One consists of a single restaurant, one sports a single liquor store, and I'm not sure the other exists at all. Certainly, load up your gas tank, cause there is NO place between Rawlins and Lander to buy gas.


I really like what I saw at Wyoming Catholic College. It seems to me that the staff and professors have the right stuff.

A couple more weeks and we do it all again for son number two at the College of St. Mary Magdalen in NH.