Of Statues, Monuments, and Flags

In the matter of reforming things, as distinct from deforming them, there is one plain and simple principle; a principle which will probably be called a paradox. There exists in such a case a certain institution or law; let us say, for the sake of simplicity, a fence or gate erected across a road. The more modern type of reformer goes gaily up to it and says, “I don’t see the use of this; let us clear it away.” To which the more intelligent type of reformer will do well to answer: “If you don’t see the use of it, I certainly won’t let you clear it away. Go away and think. Then, when you can come back and tell me that you do see the use of it, I may allow you to destroy it. - G.K. Chesterton


When deciding about removing flags, monuments, statues, etc. I think it is wise to first consider the Chestonian principle - by the community that "owns" the statue/monument.

Quick thought: I don't think many people in America would object to Russian citizens toppling statues of Lenin when the Soviet Union collapsed. 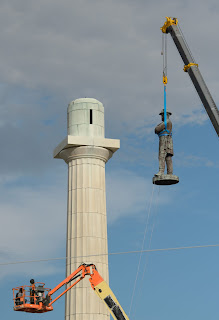 A local (county, university, town, state) population should decide why they honored X (substitute the name of any Confederate General, flag, monument, public figure) on their public grounds in the first place. If they decide that this person/symbol no longer represents their values or the community and want to remove it, then they have that right.
However, outsiders like Nancy Pelosi or Donald Trump or myself should have no demands in the matter.
A member of Congress from California has no standing in agitating for the removal of Robert E. Lee from any venue but from Federal property or in her own local district on public land (as a private citizen in the latter case.)
In this era of so-called "self-identification", isn't it ironic that local communities are being pressured to conform their identity to political correctness?
The argument that Confederate Generals are traitors and should not be honored is misleading. The issue of the legality of succession was decided by the War Between the States. Before the Civil War, various states (including Northern states) had discussed succession and not considered it a treasonous proposition, but an option. It is not the equivalent of putting up a statue of John Wilkes Booth or Benedict Arnold!
On the other hand, those who say we are trying to change history when we remove monuments, are also wrong. We are only re-evaluating who we honor from our history.
There is much complexity to these issues which also depend on the type of monument and its venue.
For example, a memorial for soldiers who died in the Civil War is not so much a statement on the war itself (as the Vietnam Memorial is not) as a remembrance of family and friends who died. After all while most of the Confederate officers may have owned slaves, many, if not most, non-officer soldiers did not.
The Confederate flag may have a different legacy. It is a powerful symbol that many have used has a symbol of white supremacy both recently and also when they began to be raised on Southern states capital buildings in the 1960's. There would seem to be much more justification for their removals.
Individual Confederate Generals/Officers monuments may sometimes lay somewhere in-between the two examples noted above. Many of these men may have been honored for attributes other than, or in addition to, their leadership roles in the Confederacy.
However, in each case the local community should make thoughtful decisions.
We need to pray for peace in this country (an in our own souls.)
On this Queenship of the Blessed Virgin Mary .... Oremus pro invicem!
Posted by Jim Curley at 1:38 PM 7 comments: 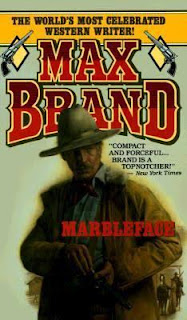 One of my favorite genres to listen to in my travels are westerns. They have enough adventure to keep me awake, but generally not too stressful. You know the outcome. Zane Grey, Max Brand, Louis L'Amour - these are the mainstays.
I am just finishing up the strangest one I have ever listened to. Here's the background: Successful middleweight boxer suddenly develops a heart condition in the middle of a fight. Realizing he can no longer exert himself for long periods, he plays poker, takes up a revolver and heads West.
He has all kinds of adventures, but must escape from pursuers by walking (no running), must take a nap in the middle of a conflict after hitting his foe, and generally walks around unscathed despite the handicap.
It is just the strangest Western I have ever read - but there are only so many plots, right?


Oremus pro invicem!
Posted by Jim Curley at 6:19 AM No comments:

Mr. Jason Craig has penned an interesting article over at Those Catholic Men concerning manhood and consumerism. Here are some of the key ideas:

The worst outcome of the trend toward specialization is that giant companies gobble up market share (for the sake of money, not the things made) and controls the production and delivery of the goods we need.  Being unable to “compete” with them through doing or making or doing it ourselves, a man is reduced to, as Berry puts it, “the negativity of his complaint.”[4]  He is a consumer and can only complain about the products he consumes – he cannot change his status as a consumer or actually change the product.  In other words, because you can’t do anything for yourself, the only power you have is to leave negative feedback about a product.  Just think about the sad “power” of leaving feedback on Amazon.  That’s all we have.  And that’s sad.

Men consume because they cannot do and what they do they do to consume.  They can’t cultivate the world around them to fit their needs, but can only try to purchase themselves out of boredom and stress and hunger.  The anxiety of modern man then is reasonable.  He is helpless and at the mercy of those that sell, control, or hand out his sustenance.  Servility comes naturally with a sense of anxiety – for good reason.

Freedom, both economic and spiritual have many facets.

So we have been growing these (not soccer balls): 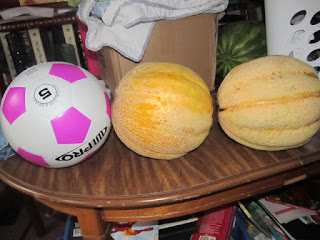 But every morning one or more is half eaten. So son Thomas puts a honeybun in the raccoon trap and catches this: 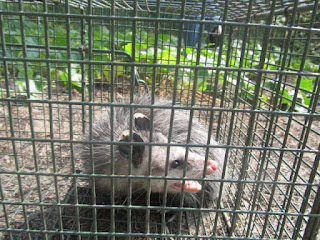 We reload the trap tonight in case there is a family....