Red had pigs this weekend. Historically she is a good mother. 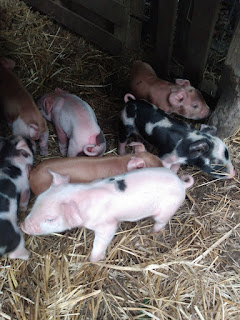 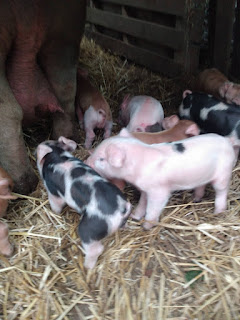 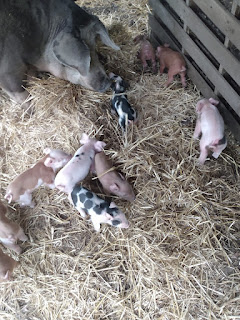 We also harvested our popcorn this weekend. I had taken a couple ears a few weeks back. I popped them in our Whirley Pop and it was great - so time to harvest the rest.

Posted by Jim Curley at 1:32 PM No comments:

Sad Update: Well we lost the litter and the sow. Turkey vultures came after a couple. I drove them off - I think permanently, but then we noticed that Rusty (sow) was eating or moving around much. Then her piglets started to get lethargic - due lack of nursing. We put the most energetic with Floppy's litter and it seem to take. In the meantime, we found a rupture in Rusty which was unrepairable. We transferred the remaining two energetic piglets of her litter to Floppy and put Rusty down. This morning, the transfers were dead. We tried, and Floppy tried, I am not sure she could handle 3 more.

Under a tremendous (and tremendously needed) rain, Rusty had her litter. Only 7, and one is really tiny. I don't think it will make it.

Red is not due for a few more weeks.

Posted by Jim Curley at 2:17 PM No comments: