I was at the library the other day with a young boy who is staying with us. I haven’t been in the children’s section for quite a while, so I decided to stick with something safe: Goldilocks and the 3 Bears. It was billed as a modern retelling, but really there was only one modification from the classic tale: no gender was assigned to the 3 bears. We had a large bear, a medium-sized bear, and a small bear.


At a doctor’s office with the same young boy a few days later, I read another fairly recently issued children’s book about a young character with a fairly generic plot:  child having a bad day; decides to run away; but then returns after missing sounds and sights of home (as well as meals.) All the characters in the book were talking animals-although the type of animal was not clear from the illustrations. As with “the 3 bears”, there were no specific gender references to either the child character or to the adult figure (note that the household had only 1 adult figure.)  Gender specific pronouns were absent.


Now this is just an anecdotal finding, but I won’t object so much in the future to Mrs. Curley’s insistence on saving boxes and boxes of children’s books for our grandchildren and/or other child visitors to our little homestead.


Up until now (homeschooling and all), we have been somewhat insulated (by design) from the cultural revolution against our children. I have read numerous articles and warnings about what is being taught in public schools; I do worry about nieces and nephews. But truly we haven’t experienced some of these things firsthand.


So what’s so devastating about genderless bears? First there are no genderless bears living in the woods! (Farm kids will know this-but we have less and less of these.) Secondly, the 3 bears are representative of a family. One book doesn’t make a cultural revolution, and in the absence of the 2nd book, I would have thought it stupid but uninteresting. But if this is a trend, it has an agenda to destroy the family and indoctrinate our children-especially because it isn’t “in your face”, but subtle as the case builds, book after book.


And, by the way, in both cases, the young boy doesn’t read yet, so I did insert gender (Papa Bear an Mama Bear) into both books.
Oremus pro invicem!
Posted by Jim Curley at 10:26 AM 3 comments:

Last year our cantaloupe crop was lousy to non-existent. This made me nervous because I didn't have too many seeds left from 2014. Here is what I said about the cantaloupes in 2014:

A friend of ours saved some cantaloupe seeds from his dad's garden in Nebraska 30 odd years ago. Last year he planted them and 5 plants came up and fruited with some of the sweetest cantaloupe I have ever tasted. My friend gave us one of these treasured cantaloupes. I saved these seeds and planted them this spring. We harvested the first ones this week. Boy are they good. The best I have ever tasted. Guaranteed we are saving more seeds!

This year it looks like we will have a good crop. I picked two this morning. (pic) 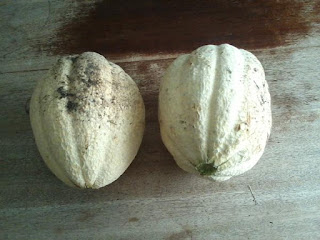 However we have lost 4 big ones, not quite ready for picking. I think its the cats clawing at them and taking a few bites. This really annoys me. These cats don't do their share in catching mice. We overfeed them, and how they are wrecking my cantaloupe crop! But I need proof! 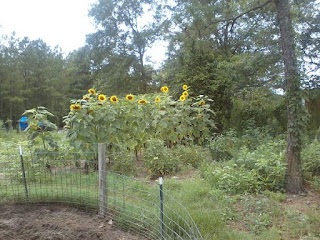 And here's a view of our modest sunflower patch.

About midway through a semester I get the previous semester course evaluations. Sometimes the comments are helpful, but there is always something I get a kick out of.
Take this one for example:

I’d cut out the quizzes, they were utterly unnecessary. The quizzes would pertain to the most simplistic things, usually making students overthink their answers. Aren’t the purposes of quizzes to boost grades? Not hand out free 0’s?

Besides the fact that quizzes are not given to "boost grades", does the student even understand the irony of his own complaint?
Another complaint was that the test questions were not the same as problems we worked in class or on the homework. I always try to impress upon the students that we don’t want simple regurgitation. We teach the concepts and then work examples which apply those concepts. Working test problems correctly will show that the student understands the concept and can apply the concept. It is not a matter of just memorization of problems. It is matter of learning and understanding. But that is not what they (some of them) want.
****************
After Mass on Sunday, Father asked us to pray with him a Hail Mary and the St. Michael prayer due to all the violence going on. I am thinking that this will become a weekly thing....
Oremus pro invicem!
Posted by Jim Curley at 6:42 AM No comments:

A contrast, but not a contradiction

A contrast, but not a contradiction ..... 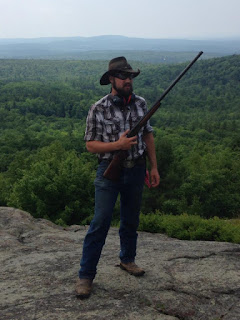 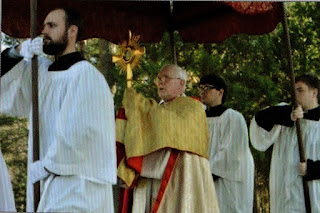 Mrs. Curley wasn't home this evening to cook dinner, so I stepped up to the plate and hit at least a double with the fried chicken, okra, and salad. Here's what was left after the 7th inning stretch: 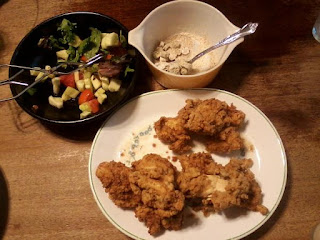 Now to the shower to wash of the dust from our neighbor's corn field which he graciously let us gleam for leftover corn before he disks it. Then, maybe some cribbage?

My point is not to dispute particularly with anyone, including my friend, neighbor, and better writer than I who lives not too far away, but ........

To say that my vote for Darrell Castle (WHO?) is a defacto vote for Hilary Clinton tries to deny me the right to vote for the best person running for president.
Why do we have legal same-sex marriage, absurd gender issues, women in combat, women poised to be required to register for the draft, continued abortion on the demand, and host of other problems, both economic, moral and financial?

I could make a good case that it is precisely because men and women of good conscience continue to vote against that conscience, election cycle after election cycle. And because of that the Republican party knows it can ignore moral and social issues and give us the likes of McCain and Romney as nominees, and now Trump. These guys lose anyway, so why not vote for someone better?
The question has been asked: Are you better off than 8 years ago? Financially, most definitely yes. (I give the credit to God, however, not Obama!)
When asked the question, most people think of the financial aspect.
Culturally and morally we are much worse off - and it effects everyone regardless of financial well-being. There is more moral desperation than ever before, more confusion, and more hurting, more poverty of soul.
I know that neither of our major party candidates can make this better because they are either immoral or amoral.
Oremus pro invicem!
Posted by Jim Curley at 5:30 AM 2 comments:

I read an article the other day praising the interstate project of 60 years ago and claiming we need another such project now.

My initial reaction was that the interstate project destroyed many local economies, communities, cultures.

Big business certainly benefitted as now they could truck their goods more efficiently across country on the taxpayers back.

Individuals may seem to have benefitted with easier travel and mobility, but communities not on the interstate routes died. (Think the movie "Cars", or the story of my town, Bethune, SC which used to be on the route to Florida from the Northeast.)

On the other hand, towns along the interstate now boomed, just like the days of old for communities on the major rivers.

And by the way, America has always been about mobility: Go West Young Man!

I still think that the loss is greater than the gain. After all families and communities are made up of individuals and the apparent short term benefit is a long-term cultural loss.


The interstate was one of the early steps which killed the family farm. (Need I say more?) We need tasteless tomatoes from California; bland cantaloupe from (who knows where) in the middle of winter; watermelon which tastes so-so, but can sure be stacked (Bradford).
As far as another BIG project now? Isn't everything the government does BIG now? They take over everything: BIG education for one. Now they are regulating bathrooms and marriage licenses!
We need "small is beautiful" not big is beautiful. (or: Local is lovely-Distant is disaster?)
Ah.........