Although we need to always remember that we need spiritual peace of mind primarily, and shouldn't store up earthly treasures, at the same time, the following pictures give me some peace of mind for the coming cold season. 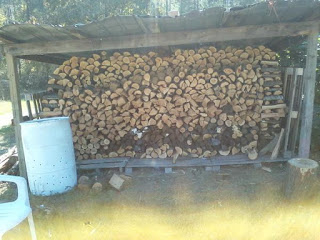 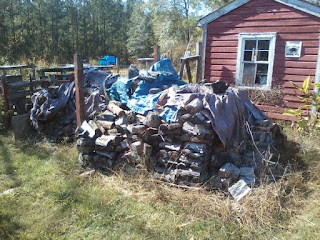 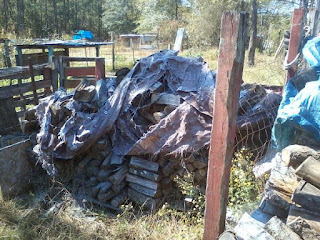 Most of this wood was cut and split ongoing since last February. However, since hurricane Matthew came through we have been cutting up friends and neighbors trees for the coming year(s). It is keeping us busy. Friday, Thomas and I worked on a big Hickory. This wood will be cook on.


Of course having food gives peace of mind too .... 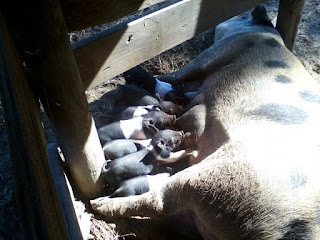 We went to Pointsett State Park this weekend. I think I have mentioned we have a few other children staying with us right now. Camping was a new experience for them - but something they now want to do again. It was hard to leave.
It was the first time all of us spent the night away from home in many years. The cow is dry, so we just made sure all the other animals had extra feed, hay and water. They seemed to make out okay.
We arrived at Pointsett on Friday afternoon. We got 2 campsites because we wanted a little privacy and had 3 tents and 9 of us. After setting up camp (tents mostly by Thomas) we went over to the field and had wheel barrow races, tug of war and a friendly game of kickball. (Sort of friendly, Mrs. Curley was rolling fastballs when my team was at bat!)
Friday night, Mama (Mrs. Curley) put a seafood medley in a cast iron Dutch oven on the fire. I grilled some flounder on the Coleman stove. I think we had some veggies too and put some potatoes in coals.
Saturday morning (after an interesting night in the tent for some) I cooked up some bacon and eggs while we broke up the camp (Thomas again doing most of the disassembly work). 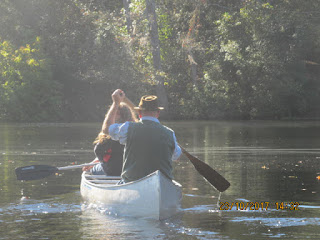 We then rented a canoe and two peddle boats. I drove the canoe, and we switched off my front paddler until almost everyone had a turn. We saw some diving ducks. Supposedly there were a few small gaters in the pond, but despite claims of seeing them, I don't think we really did.
We had a picnic lunch by the lake and then headed home.
I think everyone had fun. Usually I don't say it is good to be away from home, but in this case, I think it was good to have fun at a neutral site.
Now Thomas and I have a backpacking trip to schedule. We might go back to Jones Gap and see Raven Cliff Falls, or maybe decide to pack along the Chattooga River. We'll see.
Oremus pro invicem!

Posted by Jim Curley at 6:13 AM No comments:

I was trying to sell a couple of sows to make way (that is, raise the purchase price) for a new sow. The State Fair is in town, and I heard there were some Old Spot gilts and some Chester White gilts - both of which I wouldn't mind having.
All three of my sows were pregnant, so I put out a deal. Good price for two pregnant sows, just ready to give birth. (6 week old piglets will fetch $40-60 easily, so purchase price of the sow was contained several times over in her belly.)
I had some serious bites, but Friday at the noon watering, Thomas comes running in saying that Sam (Samantha) was farrowing at that moment. We hadn't even moved her to a farrowing pen. She didn't finish having pigs until after midnight, but we moved her in the process. (Two myths broken here: 1. sows are in some kind of trance during labor (I have never seen it), and 2. Sow labor is 2-3 hours - mostly true, but Sam holds marathons.) 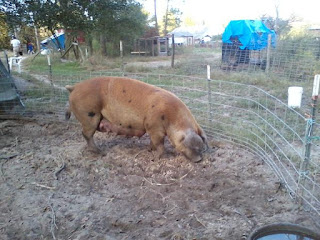 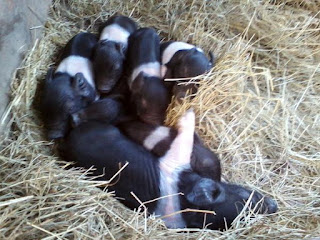 As a precaution, we moved Polly to her farrowing pen also. We have a few extra souls living with us now. It was their first time moving big pigs. I think they enjoyed it and observed some interactions they hadn't seen before!

I figured I still had a chance to sell Polly.... 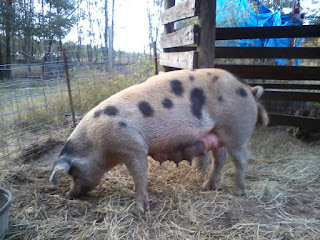 Sunday morning, Thomas comes in and announces Polly farrowed overnight. She pulled all the hay from her house and built a nest over by the fence, piling hey and dirt so high, the piglets fell through the higher openings. But Thomas recaptured them and all is well (except I don't have a new sow!).


But I thank God for the many blessings he has bestowed. 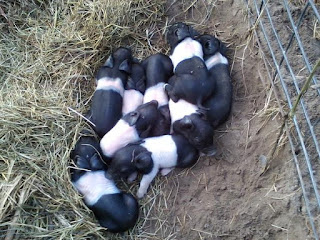 Oremus pro invicem!
Posted by Jim Curley at 6:25 AM 3 comments:

Sex (as in male or female)

I never thought of this before:

Now, sex is the first thing we notice about someone, and the last thing we forget.


It is true. When describing someone we've met for the first time, we never struggle to remember whether the person was a man or a woman (although people are trying to make it difficult these days.) We might struggle over the name, eye color, height, weight (except in a general sense), but we don't forget whether they are male or female. It's hard to hide.

Yet the confusion people are having describing their own sex these days! Read Anthony Esolen's take.


Oremus pro invicem!
Posted by Jim Curley at 10:59 AM No comments:

On debate and discourse:

Yet it is striking how appearance can overwhelm reality. We are being trained that all that really matters is whether it looks like you’re right—not whether you actually are. Or more, it’s not even about seeming to be right, but seeming to be in control, suave, and strong. Words become bludgeons, tools to manipulate. Speakers are reduced to actors, playing a part in a charade.

There is of course a place for the art of rhetoric in discourse, especially public discourse. But at the end of the day, discourse is not combat; it should not be about winning but about communication, and coming to some truth

It seems that email, comment boxes, and the like have exacerbated the problem.
And The End of the Utilitarian Argument for Trump:

Many conservatives, then, have been making what we can call the utilitarian argument for Trump. They argue that those who appreciate how bad a liberal majority on the Supreme Court would be should recognize that Trump, for all his faults, would be less bad than Clinton, so they ought to vote for Trump

Stated in these terms, this argument has always been too simple and too fast. A vote has lots of effects, only one of which is increasing the probability of a particular candidate’s victory. In particular, all else being equal, the more votes Trump receives, the more people will think that his platform is one that deserves a place in American politics and that his style of politics is worth emulating; it encourages the Republican Party to adopt his views and manner. A Republican vote for Trump will, generally, be taken as a Republican condoning of Trump

.
And is that what we want?

Finally, here is the future: The a third party based on solidarity, subsidiarity and distributism.
Oremus pro invicem!
Posted by Jim Curley at 5:00 AM No comments:

You all understand, of course, that a vote for Trump is a vote against that the most pro-life candidate running for president. (really?)
You all understand, of course, that it is only moral to vote for the lesser of two evils when there are NO other choices?
The wars are heating up, and even as prominent "conservatives" are abandoning Trump, others are surprisingly clinging even tighter.
I was in an email exchange this week which was prompted by a friend forwarding an article to me and a bunch of other Catholics on why Catholics should vote for Trump. (Interestingly, the organization sending out the article abandoned Trump themselves in midst of our "discussions".)
It is interesting that not a single one of my arguments against voting for Trump and voting 3rd party (practical or philosophical) was ever addressed by those opposing me in the exchange. Their total arguments consisted of attacking me-often personally, "the Supreme Court", and the tired, old, philosophically flawed, and bullying technique of "If you vote 3rd party, you are voting for Clinton."
I can understand, but do not agree with, the "stop Clinton" reasons. In fact, I refer readers to the first two sentences above just for starters.
This whole thing reminds of a line from Fiddler On the Roof (watched this weekend):
And it won't make one bit of difference
If I answer right or wrong
When you're rich they think you really know.


Apparently I am not rich enough to have my arguments even considered by many others. I guess Trump is!
Funny how worldly success attracts the respect and admiration of even those who say that worldly success is not important and secondary to relationship with God!
Years ago I never understood in Alphonsus Liguori's Stations of the Cross, the big deal about eschewing all human respect.

My outraged Jesus, / by the weakness You suffered in going to Calvary, / give me enough strength to overcome all human respect ....


I wish I was still in that state of oblivion, because sometimes (especially this week) how I crave it. I want others to say I am right. (It should be good enough for me that Mrs. Curley does - but I am a greedy man.)
BTW, I am not fishing here-if my craving were satisfied, this would be a bad thing spiritually for me. If you think I am right about anything, keep it to yourself!


Oremus pro invicem!
Posted by Jim Curley at 7:17 AM No comments:

The Lesser of Two Evils

Someone must have said this before me. I can't imagine this is original thinking on my part, but it makes SO much sense:
As long as we vote for the lesser of two evils, the only possible outcome is evil!

Maybe the hurricane Matthew cometh! Good thing we canceled the family campout we planned for this weekend. While a get away to the upstate may have been dry, it is best we are here during the storm with all the livestock we have around.
Our laying hens must have good hearing. After two weeks of only getting 2 eggs a day from a flock of almost 20 hens, I started talking about lots of chicken pot pie. Suddenly we are getting 10 eggs a day.
When to Mass this morning and then breakfast at Huddle House to celebrate: Number two daughter turns 18 today!
Reading from Galatians today. St. Paul corrects St. Peter "to his face" in public  for his hypocrisy and poor judgement. Do we still have courageous Bishops?
Couldn't help but smile at the pieces on Bishop Etienne (Cheyenne) now that he is getting Anchorage: carries around a fishing rod-just in case, brothers buy each other rifles for Christmas, 3 priests and a nun in his family, spends free time chopping wood.
I keep checking the peanuts and the sorghum, but both are not quite ready.
Speaking of not ready, I am not sure I have enough wood cut for winter yet. I have it here, but much still needs to be cut and split. In addition, we still need to clean out the chimney. People are telling me its my turn.
Oremus pro invicem!
Posted by Jim Curley at 12:05 PM 1 comment: