Constant stories in the news about self-indulgence in America and the West: legalizing marijuana the the businessmen licking their lips, LBGT...xylmnop.... everywhere, recent movie releases which celebrate exploitation of women and gratuitous pleasure.
On the other side of the world, Christians being martyred and kidnapped. War ravages.
Nero fiddles as Rome burns?
A not so modest proposal: Christians are fleeing the Middle East, the Holy Land. What if 10,000 or 20,000 Western Christians sold their belongings and moved enmass to formerly or presently Christian-occupied areas in the Holy Land. We wouldn't be an army, except an spiritual army bringing prayers, hope, and solidarity.
Yes I know there are problems (which I can enumerate) with such a proposal, but how can we personally (at personal sacrifice) show solidarity with these Christians who are suffering?
Lord have mercy on us!
Oremus pro invicem!
Posted by Jim Curley at 12:18 PM No comments:

Sunday when we got home from Mass, inside the house was in the 50's. I wasn't feeling real well. Someone started a fire in the stove, but I just needed a nap. So I bundled up on the living room couch and the kids did their part and gave me more insulation - see below. 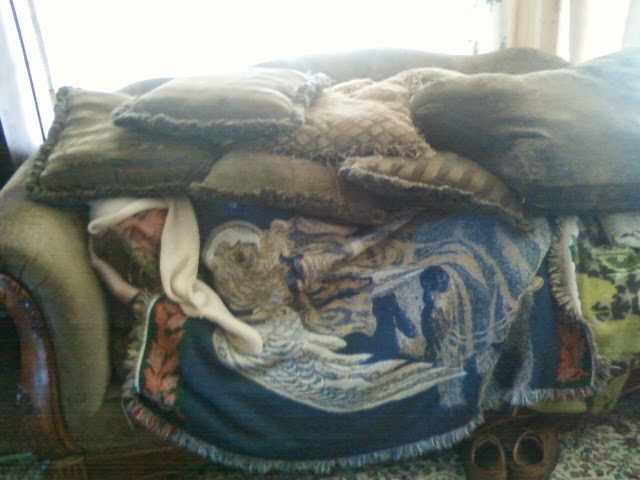 Apparently someone thought is worth recording. It was a goooood nap!

Since then we have all been down with some kind of bug. Due to the freezing rain Monday night, fortunately my Technical college canceled my evening classes on Monday and all classes on Tuesday. Much needed down time here. Back to work today as we begin Lent.

As indicated in a previous post, most reviews I have seen of Anthony Esolen's book Reclaiming Catholic Social Teaching (Sophia Institute Press ) have been extremely positive. There was one exception which I also noted. After finishing the book, I am convinced that the negative reviewer either didn't read the entire book or was so looking for certain information outside the scope of the book, that he missed the point.
Many who write about Catholic Social Teaching (CST) are seeking to promote a specific interpretation of CST, i.e. Distributism, agrarianism, relief of the poor, criticism of (or justification of) capitalism, or justification of the welfare state.
But Dr. Esolen is starting back at the beginning. He draws heavily not just from Pope Leo XIII’s Rerum Novarum, but many of his other writings on marriage, the family, and the Eucharist. This is not to say that Pope Leo XIII's writings are the beginning of CST. Dr. Esolen argues that CST has a long tradition-going back to Christ in the Church. Pope Leo is taking the time to restate it and flesh it out in the light of a world in political and industrial revolution.
Dr. Esolen does not propose an economic "third way" between Capitalism and Socialism, but defines the right relations between man and God, the family, community, employer/employee, and the State.
Thus, the economy (in the right sense) is concerned with the family not industry and investors. The State (in right relation) is in service to the family, not a policeman of the family.
Before I began reading the book, the word in the title "Reclaiming" misled me to think I was going to read a detailed plan to apply CST. Instead, I got a better understanding what CST actually is. Thus the "Reclaiming" is a reclaiming of our understanding of CST. It is not a political or economic (in the commonly understood sense) agenda. However, it is a plan in the sense that a true understanding of CST should inform our response.

And in the final analysis, Dr. Esolen does give a plan-the same plan which is the solution to all our individual and world problems-Christ, especially Christ in the most Holy Eucharist.
Highly recommended! Thanks Dr. Esolen for this effort.
Oremus pro invicem!

Posted by Jim Curley at 6:30 AM No comments:

.... on this feast of Sts. Cyril and Methodius (and of course St. Valentine)?
The same thing I did on my last wedding anniversary - butchered a hog!
I also cooked up a bunch of sausage, made some head cheese, and worked on taxes.

Just finished listening to Chesterton's Manalive. I was telling Mrs. Curley about it, but she thought the man who broke all conventions but kept the Commandments was silly. Yet......
I could see the profit of leaving on a journey East (or West) around the world just to find my home again. And I could see the profit of recourting my wife over and over.
May be I am a romantic, or may be Manalive is a man's book?

For Christmas, my wife and daughter downloaded a bunch of books and stories from Libra Vox for me to listen to on my travels. (Each day have at least a 60+ mile commute each way.) Right now I am listening to Chesterton's Manalive. So, I decided I would pray the rosary on my last leg home. Usually I start it at the blinking light in Kershaw. However I was enjoying the book so much, I was seriously contemplating skipping the rosary (just this once-right!) for Chesterton. But he (Chesterton) would have none of it.


Just as I approached the blinking light and eased to a stop, came the words out of the speaker from Manalive:

Then he sat staring rather foolishly at the rude lantern of lead and coloured glass that hangs over my door. It is old, but of no value; my grandmother gave it to me long ago: she was devout, and it happens that the glass is painted with a crude picture of Bethlehem and the Wise Men and the Star. He seemed so mesmerized with the transparent glow of Our Lady's blue gown and the big gold star behind, that he led me also to look at the thing, which I had not done for fourteen years.  (emphasis added)

I couldn't resist the grace, turned off the CD, and began the rosary.
Oremus pro invicem!
Posted by Jim Curley at 8:23 AM No comments:

Even more from EBW

"There is no doubt about it, the basic satisfaction in farming is manure ...."

E.B. White tells another truth (paraphrased): Farming is 20% agriculture and 80% fixing things that break!
Posted by Jim Curley at 10:36 AM No comments:

Mr. Austin Ruse has an article at Crisis Magazine last week where he tries to make the case for pro-life Catholics not just continuing to support the GOP vs. switching to the Democratic party, but that we have a home in the GOP. However, given only those two choices, GOP seems to have diminishing returns for pro-lifers. For years many have suspected the GOP (in general) keeps with the pro-life rhetoric in order to garner votes and then does nothing to change to the light of the unborn. Witness two weeks ago when the Republicans couldn’t gather enough votes in a Congress they control to pass a pro-life bill outlawing most abortions after 20 weeks if pregnancy.


I have read Mr. Ruse’s argument over and over by others, and while I don’t agree with it, I can understand why many Catholics will continue to support the GOP for the reasons Mr. Ruse gives.


However, what I don’t understand is Mr. Ruse’s attack on Distributists who (in general) do not advocate supporting the Democratic Party. Mr. Ruse starts his close with the following diatribe:


This makes no sense to me. Most of the people I know who are concerned by the GOP’s lack of understanding of Catholic Social teaching would definitely not support the Democratic party no matter the failings of the GOP, and would also argue that the  policy proscriptions of the hard left don’t follow the Catholic prescription of subsidiarity.


Finally, he decides to start throwing insults instead of making a coherent conclusion:


While we’re at it, let’s get the Federal government out of the land business. The Feds own a third of all US land, up to half and more of many western states. Let’s have a modern day land-rush for all those Distributists out there who are just itching to fish, farm or make cheese—though one suspects they’ll stay exactly where they are, blogging and adjunct teaching.


As a Distributist, a blogger, and an Adjunct for a technical college who doesn’t just itch to work a homestead but actually does, I suppose I could take offense, as could many others.  May be Mr. Ruse has someone in particular in mind, but he uses a broad brush – exactly what he criticizes in those who criticize the GOP’s commitment to life issues. (I suppose the adjunct remark is to imply the adjuncts are just not good/smart/etc enough to get another job?)


Perhaps it isn’t the time for a third party to rise and take the place of the GOP or the Democratic Party as many of my ilk would like, but it is clear that increasingly neither party has a coherent vision compatible with primary life issues (abortion, contraception, euthanasia) or secondary life issues (subsidiarity, economy, poverty, social teaching, war, etc.)


From my view, both major parties seem more interested in staying in power than anything else. That is why they won’t vote on controversial issues near an election. This is why they come out against policies they supported previously based on the support or opposition of the opposing party. It is about power.


A case could be made to continue to support the GOP, but saying that Catholics have a HOME in the GOP, as Mr. Ruse trues to argue, seems to be stretching it. Mr. Ruse becomes even less convincing when he decides to take broadsides at people he clearly knows very little about. (And Mr. Ruse should recall that the likely biggest 2-3 contributors to the next GOP presidential nominee will likely be pro-same sex marriage as they were in the last election.) I would argue that a stronger case could be made to support neither party. The GOP would either have to re-evaluate and re-up their pro-life commitment or be regulated to a secondary party. (Of course the argument that we then would be stuck with very a majority of anti-life Democrats until the GOP decided to change would be a compelling argument against this course.)


I guess this is why it is said that politics makes strange bedfellows. This is why, I suspect, many want to stay out of the bed these days!