A job with the pigs

Warning-pictures below may be upsetting to some people .....

That's my Thomas with his handiwork. Friday evening we went over to help a friend slaughter their hogs. After the first was knocked unconscious, I was about to climb over the short fence to stick the pig, but my friend warned the electric fence was still on! Thomas didn't hesitate, he hopped the fence, sat right on the pig, which though knocked out was thrashing, and stuck that pig. Then he repeated it a few minutes later for the second.

We had these pigs skinned and butchered in 3 hours and 45 minutes-and that included a 30 minute dinner break. Thomas did a great job. 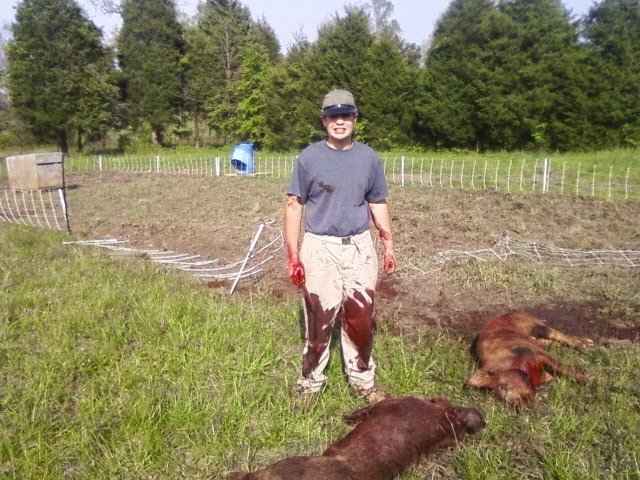 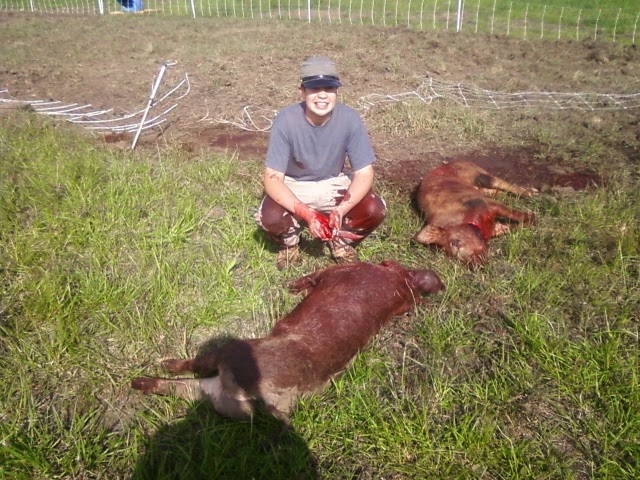 Books, CD's, and worms (not bookworms!)

My family came back from a library sale last week with a couple items for me. One was a book The Accidental Pope by Ray Flynn (Catholic, former mayor of Boston and ex-Ambassador to the Holy See.) The other was a book on CD for my long commutes entitled The Third Secret.
Both books have similarities: the prominence of the apparitions at Fatima; a Vatican secretary of state who has papal aspirations and is rigid; the promise of "big" changes in the Church, and the issue of priestly celibacy plays strongly in both.
I haven't finished The Accidental Pope, so I don't know what "big" changes might be in store. So far it simply a good-natured, but unlikely tale. But I have finished The Third Secret and have a few things to say about it.
First, The Third Secret gets some information about the Church very wrong. First the author continually confuses doctrine, dogma, Tradition, and Church discipline. For example, priestly celibacy is presented repeatedly as dogma. Papal infallibility is constantly presented to go much further than reality (at one point the fictional pope remarks that anything he says is infallible.)
Even with these faults, the book goes along as a thriller without too much doctrinal controversy for at least the first 3/4's or even more-although towards the climax there are hints that I won't be pleased when all is said and done-what an understatement.
The plot is that part of the Third Secret of Fatima was stolen out of the Papal reserva by an aid of Paul VI, who is now the Vatican secretary of state. The book centers around what the secret is. Finally at the very end we find out and also discover that the 10th secret of Medjugorje is identical to the missing part of the Third Secret of Fatima. And what is this secret?
The missing "Third Secret" is that it is God's wish, expressed directly by the Blessed Virgin Mary (I hesitate to write this as it is so scandalous) that priestly celibacy is wrong, papal infallibility is not true, that abortion is okay and the choice only of a woman, and that homosexual marriage and relations are pleasing to God ("any kind of love is good if it makes you happy").
I can't believe I wasted my time with such rubbish!


Now to the worms. I was asked below how I worm my pigs. Here is the brief tale. I try to worm my pigs as naturally as possible. This consists of putting garlic powder in their food every few months unless I see a real lack of weight gain, and then I do it more often. In the fall I give them every raw pumpkin seed I am not saving for replanting. Both garlic powder and raw pumpkin seeds are great natural wormers. If I see a real problem after worming naturally, I will use some fenbendazole in the form of pellets mixed with their feed. Since starting with natural wormers a few years ago, I don't think I have chemically wormed more than once or twice.

So now you know.


Oremus pro invicem!
Posted by Jim Curley at 5:30 AM No comments:

I got a catalog in the mail today from "The Catholic Company". I couldn't believe this: 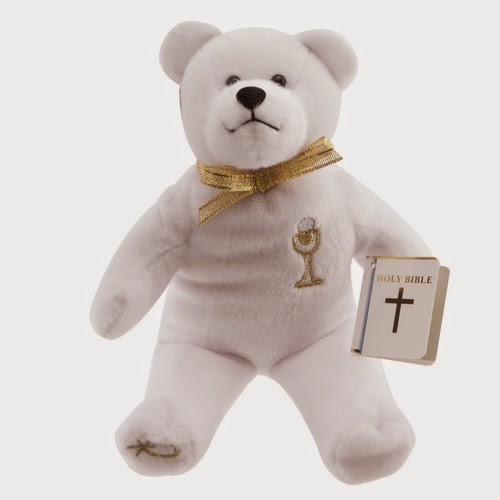 The plush First Communion bear is a cuddly way to commemorate a young child's reception of the Sacrament of Holy Communion. The small bear comes with a miniature bible containing the scripture quote from John 14:6, “I am the way and truth and the life. No one comes to the Father except through me.”

Did you get that? It could be interpreted that the BEAR is "the way, the truth and the life". Obviously, most (99.99%) seeing this won't take it this way, but either way, this is just silly!
Oremus pro invicem!
Posted by Jim Curley at 11:05 AM 1 comment:

Woke up yesterday morning to find that Sam had farrowed her litter. It looks like 8, which is a low for her, but not to worry. We aren't a high production operation! They are big, almost equal the length of the 3-week old pigs of Betsy's litter. Here is the first picture-better ones should come later. (some are under that hay.) 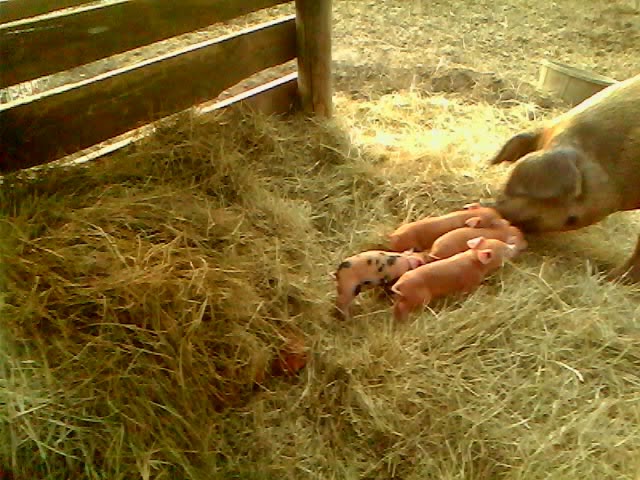 A comment below about what I am (economically/politically) is too long to answer in a comment box, so I give below a brief (and incomplete) outline. Here goes (most of this has been posted here at sometime in the last 10+ years) ....


I guess you could call me a Distributist, however the name is misleading to some-thinking that it is some kind of socialism, which if most definitely isn’t. Distributism condemns both socialism and unfettered capitalism, in that both big government and big business are ultimately bad for families, local communities, and traditional values, and argues for an economic structure based on the widespread ownership of wealth via strong local economies.

If you ever have a chance to read Catholicism Protestantism and Capitalism by Anmintore Fanfani you may come away with the idea (as I did) that Capitalism has to eventually become Socialism in the final analysis, as the Government has to eventually highly regulate everything to protect the interests of big business. The regulations become so burdensome that the government is the only entity which has the resources to support such a regulated structure. Thus the government has to begin consolidating industries under itself. (Eventually this too will collapse under its own weight.) This is trending in America today-slowly but surely.

In America we value the ownership of private property. This has become to mean that we own our own home. But few of us really do, as many have found out in recent years (and with property taxes and inheritance taxes, even if you “own” your home, really you are leasing it from the government).

Our economic system has come to a point where workers are merely tools for greater profit, to be acquired or discarded as the quarterly numbers dictate. Workers have a dignity which is not respected by too many corporations. Corporations must remember that they exist not just for profits but to provide fulfilling work and wages for their workers.

Increasingly big companies simply use their employees as commodities (even professionals) to be used up and tossed out. Workers often don’t have dignity and respect. Large companies often squeeze and squeeze the benefits and continually do more with less workers. Some of these large companies (effectively subsidized by government policies) only offer part time work so they don’t even have to give benefits.

Both major parties favor entitlements: Democrats for the poor; Republicans for the rich in the form of tax breaks and corporate deals and subsidies (think agriculture and roads)-the latter which enrich the owners of the means to production. Government handouts insult the dignity of man, at both ends of the spectrum.

So we need a system which encourages family unity and encourages the widest distribution of the means of production. These are complementary goals.

Much more to flesh out, but this is a starting point.


Oremus pro invicem!
Posted by Jim Curley at 4:13 AM No comments: