I heard a supposed holiday comedy bit on the radio last night which reminded of some events in my own life long ago ....

Before Mrs. Curley and I were married, or even dating, we worked at a small high tech start-up. We didn't work much together, but somehow we seemed to be always kidding each other about one thing or another. She and a small crew worked 2nd shift. I was the shift problem solver or consultant but wasn't really part of the shift as I had other work to do. I was just there for them in case of need.

So one Christmas, the 2nd shift decided to do a Secret Santa deal where you picked a name out of the hat and bought a modest present. It was all to be secret until the present exchange.

Leading up to the name selection I gave Mrs. Curley a hard time about her planning on stuffing the hat with her own name so she'd get lots of presents.

When it was my turn to pick a name, I immediately turned to her and said, "So you DID stuff the hat!" In fact I had picked her name, but didn't let on other than an occasional kidding about fixing the game.

On other days, I would come up to her and say, "I'm having trouble deciding what to get my 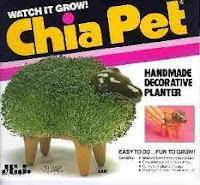 secret Santa; what do think of those Chia Pets you see advertised on TV?" She would raise her eyebrows and look at me with some skepticism, but say, "Oh I don't know. That might be okay."

Well Christmas came and I delivered a gift-not a Chia Pet. The following year we were both laid off and started dating. Now almost 20 years later and 7 children, I am still tempted to buy Mrs. Curley a Chia Pet when I see them in the store.

Posted by Jim Curley at 6:35 AM No comments:

I have been wanting to get in the shop to craft some Christmas presents, but so far my sons have been monopolizing the shop and my tools. There is only room for so many cooks. But I promised them I was kicking them out starting tomorrow as time is running short-although, I don't feel too much pressure to have everything made and finished by the 25th. Christmas is after all, a season.

Even better, I have been toying with the idea that I will have each one help me make their own present. The time spent together working and teaching may be more valuable than the gift itself.

A great friend of mine lost his mother in September and his father this week. We attended the Requiem Mass for the father yesterday in Columbia, SC. It was only the second Requiem Mass in the Extraordinary Form (TLM) I have ever been present at. A priest from the Priestly Fraternity of St. Peter flew in to offer the Mass.

My sons being some of the few altar servers at our small parish, I go to several funerals every year. Very often there are very few communicants at these funerals. No wonder, we live in an area with few Catholics, so friends attending are often Protestant. But often times many of the family members themselves are not communicants. It may be the case that the deceased was a convert to the Faith, but also, I suspect, sometimes, the family members are no longer practicing Catholics.

This wasn't the case yesterday. The deceased had a large family and there were many, many communicants. Praise be to God for a life well-lived and a great passing on of the Faith to his children! May his sould and all the souls of the faithful departed, rest in peace!

Posted by Jim Curley at 4:32 PM No comments:

I am sure posts will be scarce the next week or so. I leave you with my latest article: here. Longtime readers here will recognize some of the content. Recycle you know!

Posted by Jim Curley at 6:46 AM No comments:

From the last print issue (ever) of Catholic World Report:

The US State Department reports that there is no Christian Church open to the public in Afghanistan.

The State Department has acknowledged that Afghanistan has seen a decrease in religious liberty in the past decade since American troops have been active there. The last know Christian church was demolished in 2010.

What a record we have. Most of the Christians have left Iraq also. Who's winning what wars????

My latest at CatholicLane can be read here about Ayn Rand's influence on Congress. I conclude:

It would seem to me that Congress and the American people would do well to
think about Peter Maurin’s words rather than Ayn Rand’s.

The trend is mega-churches, and that all too often includes making larger and larger Catholic parishes. In the Church, I suppose the purpose is a consolidation of resources-both priests and financial resources. I think this is a mistake.

In a small parish, the priest can be a true shepard to all the flock. The priest really knows his flock, family by family, regardless of whether a particular person or family is involved in numerous committees and activities. I think this is critical to the spiritual welfare of the Church.

Likewise I think there are far too few dioceses. I think they should be smaller and more numerous. Thus the bishop can really get to know his flock.

In SC, the Catholic population is small, but the diocese is large geographically (the entire state.) When Bishop Baker was here, he spent his time tirelessly traveling the diocese and was very accessible. (I make no comment on our current Bishop simply because he hasn't been here very long and I don't know as much about his activities-although he has made the effort to visit every parish-but it took over a year. 90+ parishes over such an area is a tough job.)

Just another instance where I think smaller can be better....